You’re perched on the back of the world’s largest bird, but it seems docile enough and confined to an enclosure with handlers at the ready. The worst that might happen is you’ll take a light tumble – to the glee of your friends documenting the entire colourful episode for social media. No one gets hurt.

Except, possibly, the one participant whose interests tend to get forgotten in the fun: the bird itself.

Ostrich riding (and racing) is a tourist staple in most places that farm these birds, especially South Africa’s “ostrich capital”, Oudtshoorn, where it’s been part of the cultural landscape since the mid-19th century. But whether this practice is still appropriate in 2017 is questionable: a re-examination seems timely, given the recent shift away from wildlife interaction tourism.

Tourists are becoming aware these ventures are invariably bad for the animals involved, and don’t belong on an ethical travellers’ bucket list. Indicative of this trend, influential travel review website TripAdvisor recently pledged to stop selling such tours1, while the South African Tourism Board’s newly appointed CEO has taken a similar stance against this kind of wildlife exploitation2. Such announcements typically pertain to ventures involving mammals, for example elephant safaris and swimming with dolphins.

Ostriches, however, seldom get a mention.

Do ostriches count as wildlife?

Perhaps ostriches get left out because they’re birds (albeit iconic ones), and don’t rank with charismatic mammals in human estimation, or elicit equivalent concern. It may also be that farmed ostriches aren’t seen technically as wildlife; ostrich farm tours, which often feature rides, are instead labelled “agritourism”3. This categorisation of captive-bred ostriches strengthens the perception that they’re suited to human interaction and are less vulnerable to any associated stresses. There may be some truth to this; however, most wild mammals used in interactive tourism are captive-raised too, yet maintain their wild species status – which generally makes arguing against their exploitation easier.

Ostriches, furthermore, have been historically stereotyped as comical, so using them for entertainment seems appropriate. Their prominent eyelashes, naked thighs and “smiling” open beaks have been anthropomorphised in countless cartoons and photos. While other human-wildlife interactions like “walking with lions” are viewed as thrilling or romantic, ostrich riding’s primary appeal is that it’s funny. When featured in films (comedian Adam Sandler’s widely panned Blended, for example) or events such as the hammy “chariot races” held at Arizona’s Ostrich Festival, the aim is to get laughs. 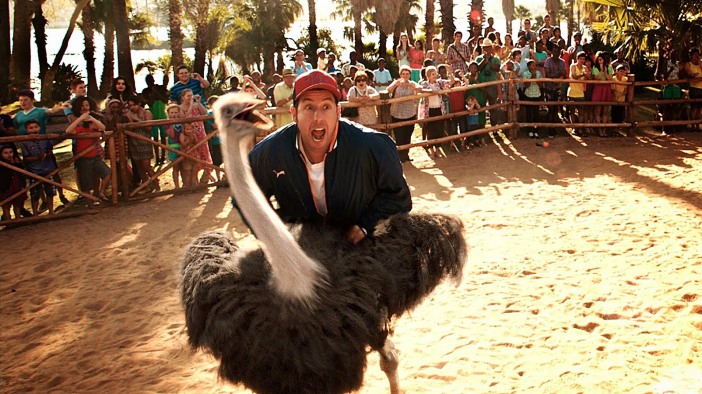 Another reason not to ride ostriches: Adam Sandler

How harmful is riding really?

But apart from what critics might consider an affront to ostrich dignity, do rides actually harm the birds? Formal investigations into the welfare implications are lacking, but if one human can safely carry another piggy-back, wouldn’t this burden an ostrich even less? An adult bird weighs as much as two humans4, and is a superb long-distance runner with remarkable leg joint elasticity, described by one researcher as “akin to bouncing on a pogo stick”5.

Nonetheless, size and strength aside, ostriches didn’t evolve to carry passengers, and there could be other unforeseen ill-effects to their musculo-skeletal system.

Being made to perform this unnatural behaviour may also cause distress. Ostriches frequently display gaping mouths when ridden, a sign of aggression in response to threat, or hyperventilation to alleviate heat stress 6.

Industry players appear well aware of such potential stressors: most farms have weight cut-offs for riders (around 60-70kg), and limit riding to dry conditions under 30°C to avoid slipping and overheating.7

Welfare woes behind the scenes

There are further compelling reasons to skip ostrich riding. Visitors to whom it appeals are seeking a novel experience, and doubtless wish the ostriches no harm. But it remains a crass display of animals being used purely for human pleasure, without much consideration for their welfare beyond a vague assumption that “it’s not hurting them”.

Tourists should also appreciate that ostrich tours and rides contributes to the normalisation and continuation of an industry that, behind the scenes, briskly converts these unique creatures into inanimate commodities: meat, frequently consumed on the premises, and luxury leather goods. In fact it is this part of the industry, unseen by the public, where the most serious welfare violations – ostriches being struck by handlers and forced into slaughter pens – reportedly occur.8

Ostrich rides, while culturally interesting, belong to an earlier age less cognisant than ours of animal sentience and suffering. Along with plumed hats and “feather palaces” built by ostrich barons, such amusements should be relegated to history.

Animal welfare isn’t fashionable in 2016 South Africa. In socio-politically charged environments, there’s a tendency to trivialise concern for animals, and take it as proof of disdain for human welfare. Yet it’s essential under such circumstances, however uncomfortable, for animal welfare advocates to keep championing their cause.

Next month, spectators in KwaZulu-Natal will gather to watch a group of youths slaughter a bull bare-handed. “Ukweshwama”, the traditional yearly ritual to celebrate the first harvest, is performed in the belief that the dying bull’s strength will be transferred to the Zulu king (1,2).

Accounts vary as to the degree of suffering involved. Reliable eyewitness reports are scarce, as access to the ritual is restricted. An anonymous eyewitness for activist group Animal Rights Africa (ARA) claimed the process took forty minutes in which “dozens trampled the bellowing, groaning bull, wrenched its head around by the horns to try to break its neck, pulled its tongue out, stuffed sand in its mouth and even tried to tie its penis in a knot.” (1)

Historian Jabulani Maphalala countered by insisting the death is fast and painless, with no blood spilled (1).

Other reports, such as those by journalists permitted to attend, suggest that the reality falls somewhere between these two accounts, but it’s difficult to see how such a death would be quick, painless and free from fear. As Beauty Without Cruelty SA speculates: “There is no way a bull killed by hand… can take bare minutes to die.” (3,4)

A comment from Zulu Chief Zibuse Mlaba seems to corroborate this: “We must use our bare hands; it’s cruelty, we agree, but it’s our culture. We cannot change our culture.” (1)

Ukweshwama, discontinued in the 19th century, was revived in 1992 by King Goodwill Zwelethini – which should serve as a cautionary tale that people can revert to traditions from earlier, and, at least as far as the animal welfare community is concerned, less enlightened times. Public dismay at the re-introduction peaked in 2009, when ARA failed to get it banned by the courts (1).

Subsequently, apart from a few half-hearted petitions, Ukweshwama seems to have dropped off the radar for the public and media, and even for animal activists. Why is this regressive spectacle allowed to continue with impunity? One important reason could be the country’s tense political climate, and the fear of appearing politically incorrect.

Opposition to Ukweshwama has come primarily from privileged white South Africans; it was thus perceived by many blacks as an attack on African values and identity. Added to this was the suspicion that the critics valued the bull’s welfare over the welfare of those upholding the custom.

South Africa has become hyper-sensitised to race issues in the last two years, a period that saw the rise of the #RhodesMustFall and #FeesMustFall protest movements, with their call for decolonisation and frequent expressions of anti-white sentiment. In this climate, animal welfare advocates, especially those who value their liberal credentials, are less likely to revisit the Ukweshwama debate, or indeed push any potentially controversial issues.

But stepping out of the spotlight is tacitly conceding that animal issues are secondary, when at every opportunity activists should be demonstrating that they are integral to human well-being. Practices such as Ukweshwama are clearly bad for animals, but they’re bad for people too. Customs that require suppression of empathy in order to stomach them, coupled with an insistence on “doing things as they’ve always been done”, have no place in an overcrowded world where, if we are to survive, we must all change our ways to curb our greed for resources and enmity for others.

Going forward, animal welfare advocates should combine tenacity with a preparedness to engage with human issues, and proceed with humility and sensitivity. Those wishing to challenge and change others’ cultural practices might meet with more success if they showed a willingness to do the same.

Perhaps the next anti-Ukweshwama petition should be attached to a pledge by petitioners to change westernised traditions that also imperil animal welfare: not only support for industrialised agriculture’s “civilised” slaughter of million, but the runaway consumption of resources (of which the privileged classes are disproportionately guilty) which threatens wildlife habitats, not to mention an entire planet.

This is a text widget, which allows you to add text or HTML to your sidebar. You can use them to display text, links, images, HTML, or a combination of these. Edit them in the Widget section of the Customizer.